For the beginning for 2014 on my  other blog Elegant Embodiments, I did a review about the caviar “Belguria” Essie nail polish and how much I hated it. It had bigger microbeads in it, rather than dipping your nails in it like the Ciate brand has.

This week I forgot that I had bought a new pink China Glaze texture nail polish, so I tried it. And I remembered why I normally don’t like these polishes. They look like a popcorn ceiling, or stucco. Especially with this pink I feel like my nails have scabies or some sort of weird skin disease on them. Gross.    Also they look and feel like a cat tongue.

Now don’t get me wrong there are many different types of texture nail polishes. from even glitter, feather, sand and more!

Well start with the most basic and something everyone has: Glitter. Glitter done right isn’t really a texture, but when its too thick or has giant pieces in it: then it does.  — Then there is the opposite(kind of I guess) matte. Matte is the lack of shine that gives the base colour.

There have been times that even within the same line, China Glaze, I liked the texture. When I did pumpkin nail art, I used the orange one and with a thicker top coat, it gave it a neat extra pumpkin-y-ness.

There are also different ones that I do actually like! Such as OPI’s liquid sand.    I have “stay the night” and “get your number” and as before(in my other blog) I still like them, I don’t find them annoying or ugly.  Talking about this line last night with a friend, she had said she hated it, she had gotten “the impossible” which is a bright red one, but it has hidden large star glitter pieces in it which she found made it uneven and lifted fast. These types do have sand in them for the texture, guess it just is a nicer  and finer type that OPI uses than the China Glaze kind.

Feather ones are pretty popular, they look like a feather layered, but its just long, thing cut glitter pieces. They take forever to layer on to get a good coat. They aren’t really a texture, more of a look but they are put into the texture category a lot of the time. Same goes for the Magnetic polishes. To get a actual feather look, you might as well go to the dollar store/craft store/outside and get real feathers, cut them and top coat over them. (same goes for lace)

Everyone knows what shatter/crackle/croco is, it is also considered a texture nail polish, but the one that has alluded me for years is the Spotted by OPI (which I could only from France, which means you can’t ship nail polish between countries) which looked like acid spots. Not really a texture more of a nail art. Shatter is in everyone’s nail bag, so it’s not new, different, or exciting. You can do some neat stuff with it, but its good for the client who wants something different but simple nail art style.

Ciate has a whole line of different texture nail polish add ons, where you dip your finger in them rather then them being pre-mixed. I find these are still annoying to wear but they look nicer. But the process for ones like Velvet nails is messy, and all I can do with these is pick at them. The come in caviar(microbeads), feather, velvet, studds and more.

The last one I actually LOVE is the nails INC Leather polish. You don’t use a top coat, but it feels like soft leather(but not suede).  It goes on easy and dries fast.  I had no complaints! 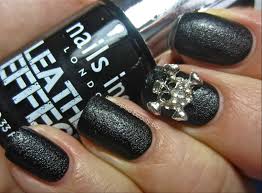 I have actually reviewed most of these before, but read through my other blog if you’d like to see my 1st impressions of the different products